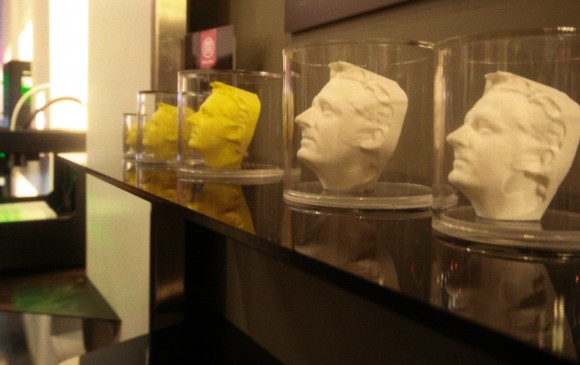 Looking for the perfect gift for the geek in your life? Or perhaps you want to add a tasteful bust to your home, but don’t know any sculptors to commission for the piece. Luckily, this is 2012 and you’re basically living in the future. With this new addition to MakerBot’s standard 3D printer, you can now create distinguished, 3D-printed busts (plinth not included).

It all starts with pictures taken with Direct Dimensions’ ShapeShot photo booth software. The method employs the use of four “off-the-shelf” digital cameras, specifically positioned to capture different angles of the subject’s face. The cameras simultaneously take pictures of the subject, then the resulting four images are combined to create a 3D image of subject. ShapeShot provides a user community where people can share their 3D portraits, as well as some apps where users can play with their 3D portrait. In conjunction with MakerBot, the 3D printer takes the portrait, slices it into layers, and prints the result.

Though the 3D portrait doesn’t exactly have a practical use, MakerBot CEO Bre Pettis hopes 3D-printed heads will create some public interest in the 3D printing community. Recently, a photo booth appeared in Japan that returns small, full-body figures, ranging from 10-20 cm tall. However, it was not made clear if the figures are actually 3D-printed, or the made by hand.

At the moment, the only way to obtain a MakerBot portrait is to visit its store in New York City, where you’ll spend around five minutes having your picture taken. After that, you’d place your order with MakerBot, and they’d ship out the finished bust in four-to-six weeks. Not as instantly gratifying as a regular photo booth, but the end result is much more unique. Throw the head in a jar, fill it with some colored liquid, and proudly display your new head-in-a-jar the next time you want to dress up as a Futurama character.